The Irish Sea spreads out into a vanishing horizon, no ships, no land, no pointed fins breaking the surface in an exciting moment of man-meets-beast. Just endless waves rolling quietly to a stop against the flat sand and sloping concrete of Blackpool’s promenade. On a clear day, ridges of wind turbines line the glistening grey of the distant sea but today, there’s just the mottled, overcast water of an average Lancashire Saturday. It’s the emptiest place in town, the one place in this overcrowded, garish, unrepentant tat market that offers an almost 180 degree view of nothing.

If it wasn’t for the piers, particularly North Pier, Blackpool wouldn’t keep drawing me back. Sat stoically but lost in age and welcoming bored strollers in all weathers, it’s a place in-between places. A non-place. Behind the arcade machines and under the polystyrene chip dishes are relics from a time when live entertainment over the sea was as exciting as going to the moon. Despite the tattiness, an air of dignity clings to North Pier like its patina of salt spray grime. It used to be a grand place to take tea and dance to organ music and if you ignore the wind whipping against your cheeks for long enough, the curled wraught-iron lamps could tell you as much.

Maybe it’s because I’m from a decrepit seaside town myself that I have such wilfully rosy observations about Blackpool. I just can’t help feeling that as cheap and nasty and dirty and noisy as it can be, it’s still, essentially, a destination for fun. At one time, mill workers would come to paddle in the sea, escaping their responsibilities for a week each year . Now account executives and nurses and retail managers fill those same gaps, spending hen dos and birthday weekends and Big Nights Out and family Saturdays away from the grind in bars and on the Big One. It’s not Valletta, standing proud and mysterious on golden city walls above a shining azure ocean, but nobody said it was. This is Blackpool. Shut up and drink your Carlsberg. 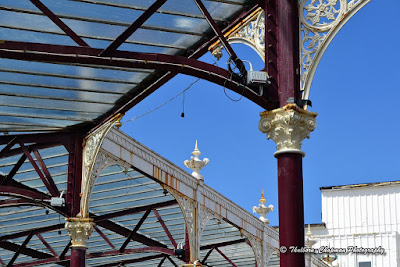 What I like most about North Pier is the pub on the end of it. Walk all the way down to the bottom of the pier, ignoring the gaps in the boards, and you’ll reach The Sunset Lounge. Protected from the sea winds and year-round bad weather by perspex and gloss paint, it’s a huge expanse of a pub, and is nearly always mostly empty inside where the darts boards and maroon carpets are. Despite clearly being big enough to host two wedding receptions simultaneously, there are three toilets in the ladies’ bathroom and the last time I was there, none had locks, toilet paper or a cushion for screaming into. I have never seen a single adult in the “pub” part of The Sunset Lounge. This area is for kids with red sugar dummies and Slush Puppy-stained t-shirts to hide under tables in.

Outside, past the bar, is the same expanse again but with a polished dancefloor that’s always occupied. On a good day, you might be lucky enough to witness the true madness of the organ player, using a thousand pedals and a thousand keyboards to play the same song a thousand times, injecting a bit more speed and terror into each rendition. Insane organ music 50ft above the sea bed helps to ease you into the feeling that you’ve completely lost your mind, so several jagermeisters are usually recommended to help get the brain lubricated. Today though, a crooner with a Korg is serenading pairs of pensioners ballroom dancing on the parquet, CDs for sale, £7. Find him on Facebook.

The best place to sit is on a picnic bench on the fringes of the lounge. Near enough to the bar (which is always well-staffed by friendly young people who know exactly what this place is) and far away from the busy arcade. On a sunny day – yes, they happen – the Irish Sea becomes the Mediterranean and bottles of Birra Moretti come out. It’s a glorious place to sit and drink. You could begin to think it was beautiful.

You sit on the benches with people who make you happy and you soak in the surreal atmosphere of mis-matched patrons letting their hair down on a tiny wonky island far away from Monday morning and you laugh until you cry. And when the bar runs out of bottles of the beer you like (they’re doing better with craft but there’s still not much) and you’re sick of shooting Archers out of highball glasses, the sun has set and you’ve taken a thousand bad orange photographs, it’s time to head to the Edwardian carousel next door. They let adults on if you’re polite. You can scream as much as you want once you’re sat on your winning horse, switching and play-fighting while you spin like you’re the star in a chintzy Western. 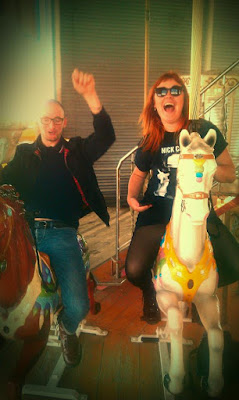 This is a place you visit on a whim. This is a place for Buckfast in your pocket. This is a place where you will always feel 17, rebellious, out of credit and finally living your own life. This is place that knows how bad the world is, and refuses to take part. I wholeheartedly respect that.