What makes a beer Christmassy?

Round 2 of our beer tasting saga was heralded by a picture message from Jason (Menzies, cellar manager of Bowland Brewery’s Holmes Mill bar) of four Christmassy beers. November is the new December.
The aim was to judge how Christmassy each brew made us feel. The intention wasn’t to judge taste, however sometimes you just have to, don’t you? The ratings are not for the taste or proficiency of the beers, they are for the Christmassiness of the beers. Turns out we are pretty strict about how festive things are.
Anyway, it’s December now, so stop your “it’s too early” nonsense, strap on some antlers and turn up the Muppet’s Christmas Carol soundtrack. Christmas is here. Deal with it.
Beer 1
Brewdog – Santa Paws – 4.5% 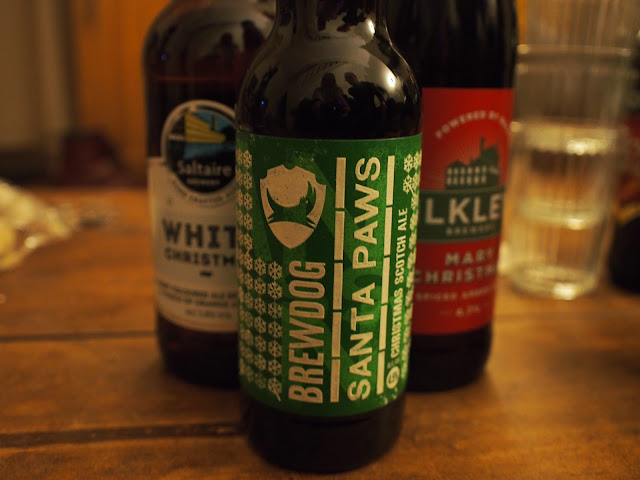 They say: A 4.5% decadent scotch ale brewed with Scottish Heather Honey. A robust malty beer packed with avour and at a strength you can drink all (Christmas) day long.
A baby scotch ale which is perfect with Christmas pudding or whilst playing Pictionary with your gran. This is our antidote to the chaos of the upcoming festive season. Raise a glass of this Christmas beer, share it with friends, family and strangers, and sit back and enjoy the view as the world descends into a fairy light fuelled frenzy. And, if all else fails, just blame Santa.
TM: It’s definitely wintery, very nice.
KT: I think it tastes like a less velvety stout.
TM: It’s not as complex as you’d think it would be.
JM: I have to say I picked it up thinking it would have something more to it – barrel aged or with Scotch in it or something. It’s nice, it’s very pleasant, and it’s very easy drinking for a 4.5%.
TM: It’s almost teetering on the edge of having a liquorice taste? I like the bitterness.
JM: I’m not detecting any Christmas.
TM: It’s not very Christmassy, is it?
JM: Well, it’s sessionable. I like it.
JM: *looking at the label* It mentions “Christmas” three times and is covered in snowflakes. That’s Christmassy.
KT: But that’s about it for Christmassiness. The marketing.
VERDICT: 2/10 – The label says “Christmas” on it.
CHRISTMAS SONG PAIRING: The Band Aid with Dizzee Rascal in it.
Beer 2
Hawkshead – Jingle Fells – 4.5% 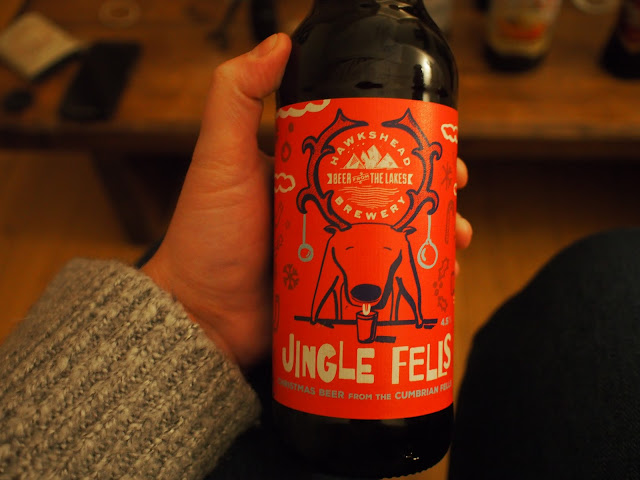 They say: A well rounded, malt-forward, spiced Christmas ale with subtle hints of smoke. Savoury on the nose with aromas of cinnamon, cloves and nutmeg. A deep ruby-red ale to be savoured.
KT: I like the smell. It smells like mulled wine a bit.
TM: I like that they’ve used the word “grist” on the label. “Grist”. “Gri-s-t.”
KT: Mmm. Smoky. Quite a lot going on.
JM: Very similar colour to Santa Paws but with a spicier taste.
*The team were then distracted by an uninvited Partridge moment on the radio*
TM: It’s still not as complex as I was expecting.
JM: Yeah it’s more subtle and I’m getting a redcurrant flavour. Is anyone else?
KT: I don’t know -the smokiness and bitterness is the only thing I can really taste.
TM: Christmas beers always promise so much.
JM: It’s pleasant though, there’s a nuttiness and smoke about it but not too pronounced. It’s sessionable and I’d recommend it to people who don’t normally drink beer as a good Christmas drink.
VERDICT: 5/10 – Christmassy enough but easy-drinking enough to be a present for an ale-drinking Uncle. Very Christmassy label including a Rudolf and a good Christmas pun.
CHRISTMAS SONG PAIRING: Two Become One by The Spice Girls. Not hugely Christmassy but pretty excellent.
Beer 3
Badger Brewery – Poacher’s Choice – 5.7% 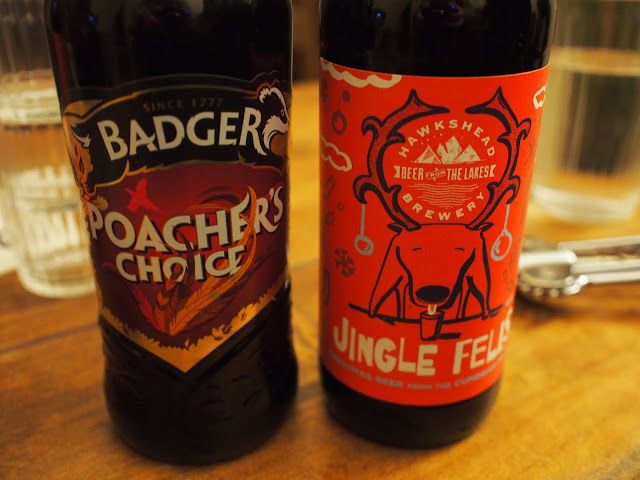 They say: Just like Badger, the wily poacher takes inspiration from the countryside’s bounty. This rich, ruby beer has a softly spiced sweetness and a fruity damson aroma. Its gutsy character is well matched with hearty game pie or a tangy mature cheese.
This was a wildcard chosen by Tom, who had previously said it was the best wintery beer and had juicy, fruity flavours that you’d normally find in a Christmas pudding. Sounds pretty Christmassy. What I like the most about this beer is that the reviews of it are mostly less than 3 stars from people who are very unimpressed by its ubiquitousness on supermarket shelves, as if that makes things taste bad. You can get Primula in Tesco and I fucking love that. Anyway.
KT: It smells like dates.
TM: And damsons.
JM: It should say “plummage”, not “plumage”.
TM: It says liquorice but I’m not getting any of that.
KT: It’s very fruity.
TM: And very wintery. But…is it Christmassy?
JM: It’s glorious. Not something I’d have in excess, it’ll get too sweet.
TM: It’s similar in that way to (Coach House) Blueberry Bitter because it’s nice but not a session. And masks the ABV well.
KT: I actually tasted a lot of liquorice.
TM: It’s polished. Like…consistent. I know they are a big brewery but this is well brewed. And I wonder if they actually use the liquorice to bitter it.
JM: This with a Boxing Day turkey vindaloo would be banging.
VERDICT: 8/10 – The only thing missing is some festive branding, but to be fair, nobody ever said it was a Christmas beer so it’s quite unfair of us to demand some. But we are.
CHRISTMAS SONG PAIRING: Fairytale of New York by The Pogues because fuck you, it’s not even a Christmas beer and it won, that’s how punk it is.
Beer 4
Saltaire Brewery – White Christmas – 5.8% 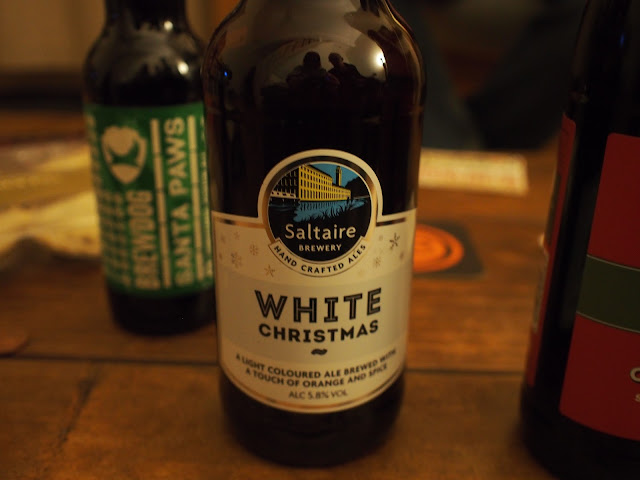 They say: A pale refreshing beer made with pale rye and Vienna malts. Light hop flavours are enhanced with coriander seeds and orange peel added to the final boil.
KT: It’s very orangey. I’m not sure if it’s traditionally Christmassy but my own connotations of this style of beer are Christmassy so…
TM: It’s nice? And I am also getting a lot of orange.
KT: It’s subtle in every other taste though.
JM: They’ve gone in quite heavy on the orange and there’s not much else going on for me.
TM: I’d prefer more head retention and carbonation for me.
JM: Well, I’d have this while prepping the veg. It’s got enough of a kick to get me ready for the arrival of Uncle Nobhead.
KT: I would like to drink this out of a stein.
TM: It’s pretty pleasant.
JM: It disguises the alcohol content really well, and that’s probably the orange.
VERDICT: 6/10 – We feel 60% more Christmassy after drinking it.
CONTROVERSIAL SECOND VERDICT FROM TOM: “2/10 – Fuck it. It’s not Christmassy. No.  And it has a white label that says “Christmas” on it in pretty much the most boring font ever.”
CHRISTMAS SONG PAIRING: Wizzard, for that sudden feeling of “Ah fuck, it’s really happening now.”
Beer 5
Ridgeway Brewing – Santa’s Butt – 6% 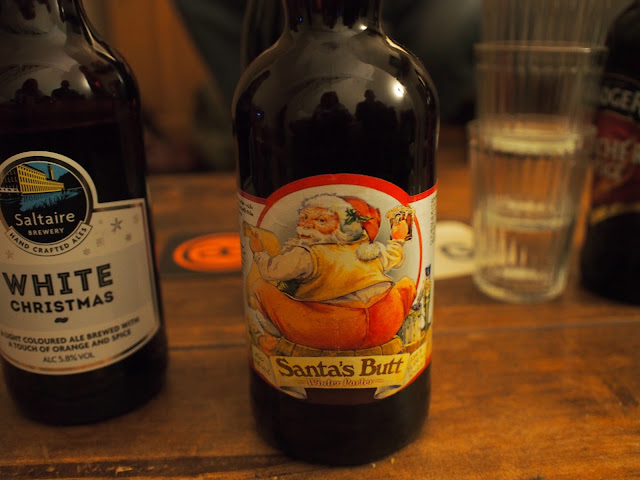 They say: This special holiday porter is made for winter – rich and warming, the way they like it at the North Pole. It was inspired by this famous line from a well-loved children’s storybook:
“And Santa sat on his great butt, enjoying a hardy brew…”
In case you find that amusing, the brewer hastens to point out that in England, “butt” refers to a certain sized barrel, in fact, holding 108 Imperial gallons. Back in the day it was quite a normal thing for a brewery to put its beer up in a large butt for storage. Still snickering, eh? Get your mind out of the gutter, or Santa will be skipping your house entirely this year.
By this point we were all fairly hammered. The best thing about this beer is that some people on the same site that gave the Badger beer a low score had given this around 70 out of 100.
JM: It just looks like shit, doesn’t it.
KT: I just spotted some Bradley Hand on the label.
JM: I hope it’s amazing.
*all drink*
TM: *whispers* It’s not.
KT: Well, it’s not a porter.
TM: Christmarse.
KT: Father Christmas’ shiny fivepence.
*We all look at the label for more information on what we’re drinking. It’s interesting. We later talk about recording future tasting sessions because we’d been laughing for at least twenty minutes at the label art and I had started crying due to hysterics.*
TM: I know nobody’s looked past Santa’s giant ass, but have a look at his face. He looks like the Grinch’s fat white dad.
JM: To call this a porter is…
KT: A liberty.
JM: It’s bullshit really. It’s a brown ale. With an arse on it.
VERDICT: 10/10 – It’s got the full Christmas factor. Wonky tree, burnt spuds, arguments. That’s Christmas.