Kirkby Lonsdale Brewery has a tap room. Did you know that? I didn’t. I go to Kirkby Lonsdale pretty often – maybe twice or three times a year, maybe more if it’s a good summer and we want to look at the bikes – and I had no idea.

Kirkby Lonsdale is a place I love. A small town, tiny really, it sits on a meandering curve of the River Lune next to the borders of North Yorkshire and Cumbria, and was in fact part of the ancient county of Westmorland once upon a time. This means it’s in the best place in the world – my homeland. The Lune valley is consistently beautiful and whether you’re looking into the peat-tannin water rushing under Devil’s Bridge or walking alongside the Crook and Bull Beck in the full force of a rare 28 degree August day, it’s the type of place that feels like it’s doing you good, somehow, right down into your bones.

Nostalgia is a helluva drug.

I decided to take a new friend on a walk beside the river to Kirkby Lonsdale to show her my childhood stomping grounds. From Tennessee, I’m fairly certain the rivers and forests she knows are far more exciting and astoundingly beautiful that the sleepy Lancashire ones I know, but Ruskin’s View is pretty nice and worth the short haul up the hilariously-named Radical Steps. She agreed, you’ll be happy to know.

After the usual mooch around town (and to the Army surplus shop, obviously) we tried to think of a place to eat cake, and that’s when we came across the sign for The Royal Barn. 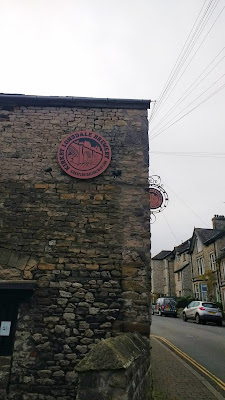 Inside an imposing door with an upbeat handwritten sign stuck to it, the place is a beautifully restored barn, once part of the large coaching inn behind. Oiled wood beams sit mellow and cosy over raw limestone walls and artfully-placed “found” items – a cartwheel, a huge old pub sign, milk crates used as ingenious little shelves. I really liked it. 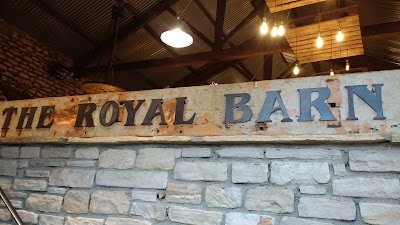 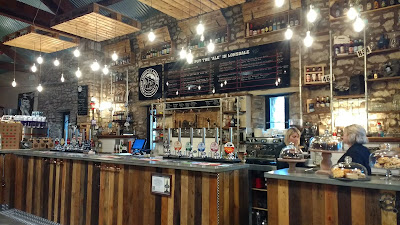 What really welcomes you in is the smell. Over in a far corner sit three gleaming tanks, including one glorious copper-topped mash tun, doing their job quietly and diligently, pumping out vigorous malty smells. Occasional plumes of steam gave a pleasantly industrial feeling about the place, as though you weren’t skiving off but actually part of a very important day’s work. 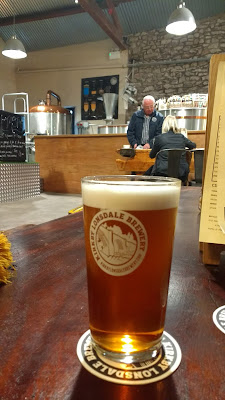 The bar itself is pretty. Two rows of cask pulls offering the full range of Kirkby Lonsdale Brewery ales and two cask ciders sit in front of an impressive range of bottled beers – including several Schlenkerla Rauchbier – and then on top of that, a row of keg taps for an ever-changing flow of craft choices. Oh, and there’s a bunch of gins they bring out on ticketed gin nights and a good coffee machine. I particularly liked the keg taps because they had objects on them rather than badges – a camera, a bike pedal, a cog. Again, winning me over with industrial appropriation. According to the friendly barlady, the tap room has been open for about a year, but took around four years in the making. Chalk signs around the bar top talked me into a pork pie with piccalilli. 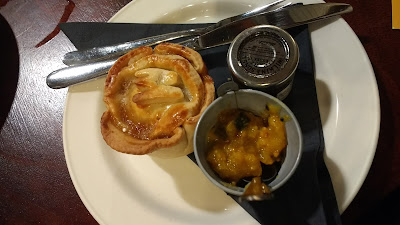 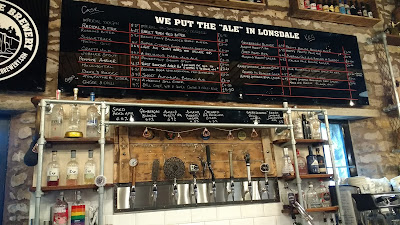 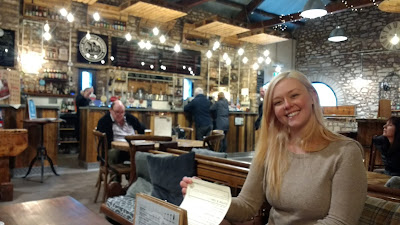 Sat with a pint of Ruskin’s Best Bitter my friend laughed at me because I apparently was smiling like an idiot. What I enjoyed was that, clearly, even a small place like Kirkby Lonsdale has an appetite for a tap room. Even Kirkby Lonsdale has the space for interesting tastes and even a small maker like Kirkby Lonsdale Brewery has the bravery to say “fuck it” and do it with new artwork, high ceilings and reclaimed furniture instead of tartan armchairs and brass stag heads. We know we live in the countryside. Please, no more brass stag heads. It’s made me excited for the future of bars and beer in rural communities up here in the North, where places like this aren’t welcomed as you’d expect they might be. Especially, it has re-ignited a not-so-secret dream of my own. Time to dig out that old business plan. 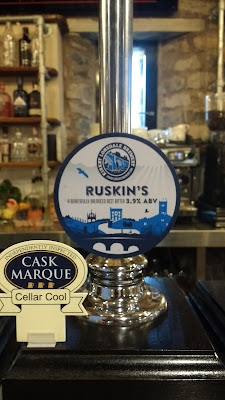 I am bad at taking photographs but I promise I’m going to practice and get better.