We’ve been visiting Edinburgh surprisingly often over the past few years. Without warning its sooty bricks and cobbled streets spooling down into the valley of its great craggy hills got into us, like a second home. I get cravings to see the castle lit at night from Grassmarket and sandstone shining with rain underfoot. I get secondhomesick after a few months away.

It’s a small city, only 500,000 people live there, but I’m constantly lost. Every visit, I find myself in a new area, sometimes with marble and wrought iron, sometimes with allotments and gravestones, realising that this overgrown village really is an historic and grand capital city. My sense of direction is famously bad, but in Edinburgh, I switch it off entirely and enjoy the mystery. Thinking laterally is one thing, but coping with the 3D road layouts of a town built in storeys is too much to ask. I guess this is the reason that Edinburgh always feels like an adventure to me.

One of the best aspects of Edinburgh, without question, is the pubs. Whether it’s about to chuck it down, the festival is getting a bit heavy or – my personal favourite – the frozen wind is burning your face and you need a place to melt off the sleet, there’s always a doorway to duck into and a cosy place to set down a pint and sip a rum. Oh, yeah, I don’t drink whisky in Edinburgh. There’s far too much emphasis on stunningly well-stocked rum shelves in every single bar for that.
One stunning example of exceptional Edinburgh pubspitality is The Bow Bar on Victoria Street near Grassmarket. A small blue haven on the opposite side of the busiest pavement in town, it claims to have been established in 1987, but feels like it’s been around forever. 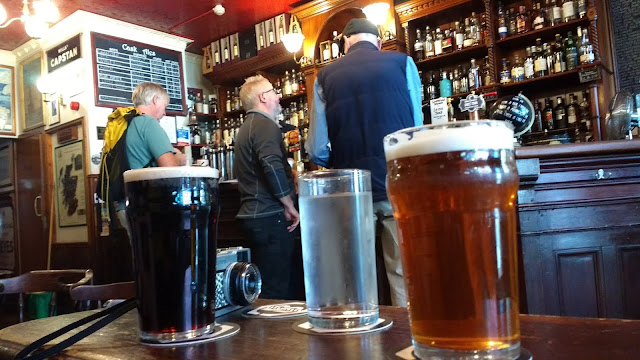 Here I tried my first local pint of my trip; a fun and zesty IPA by Campervan Brewery based in a garage in Leith. I like to think the name is a nod to the often-litigated Elvis Juice, but it was more easygoing than that, taking orangey citrus twists and involving them in really well-crafted cask ale velvetiness rather than setting my heart on fire with grapefruit acidity.
Tom chose Titantic’s Plum Porter, which if you say you’ve not tried, I’m not sure I believe you. It’s delicious, it’s festive (hey, I get excited for Christmas in May) and its soft plumminess has won it about a thousand awards over the years. Now you’ve remembered how good it is, aren’t you looking forward to Porter Season too?
I’d begged to visit and the plan was to pop in, drink up quickly and move on to meet friends over on the other side of town. It’s not that sort of place. Absorbed in the calming atmosphere of gossiping old guys, gently rustling newspapers and gleaming brass, it would have been easy to spend all day here at our tiny table by the door. This is not a pub for plans. This is a pub for salted peanuts and stories. I took the opportunity of our first-pint-of-the-day contentment and the supportive surroundings of what I was sure was my new favourite pub in the world to quietly propose to Tom. It was a bit of a surprise to both of us.
A comforting room clad in dark wood, blackboards crammed with tiny handwriting and topped with an Amsterdam-brown ceiling was where I chose to pop the question. Safe from the crowds at the castle (which had the plastic arena seating for the Tattoo out anyway) and sheltered from the blustery wind of Arthur’s Seat, here we were with our finished pints, hearts beating a little faster, nobody any the wiser. Thinking about it, it’s not that surprising after all. I couldn’t have planned it better.
What I also couldn’t have planned better was to come back from fixing my eyeliner in the loos to this: 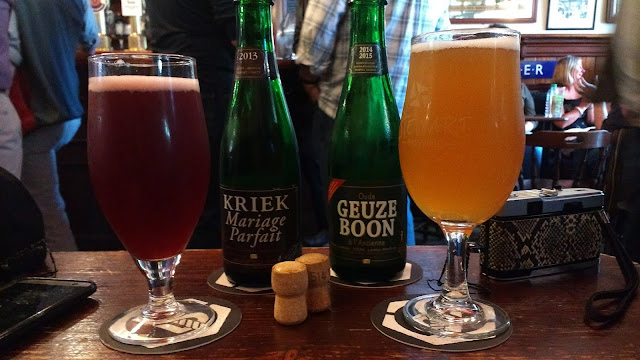 An excellent substitution for champagne. Tom says it’s the best £18 round he’s ever bought. My Oude Geuze Boon A L’ancienne was deliciously, lip-smackingly sour, a geuze I know and love. Tom’s was the cheesily-named Mariage Parfait, a juicy burst of sticky cherry goodness with the dry straw-and-berries aftertaste I always associate with lambics. Quick to point out – not the fat, pampered strawberries you get at Wimbledon, but the sour bites you find when you pick your own, doused in vinegary funk under the aroma of farm-fresh straw (EDIT – which Tom informs me is actually brett – you learn something new every day.) It’s a hard taste to describe and harder to convey that this description is actually a positive one, but it’s the best I have.
After this we hit the festival, drank pina coladas from hollowed-out pineapples on East Market Street and headed to the Paolozzi pop-up under the arches. 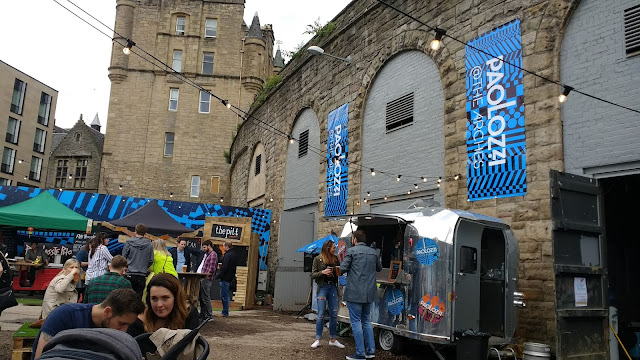 Despite the oh-so-bellissimo name, Paolozzi is actually a Munich-style lager brewed by Edinburgh Beer Company. They say: “Edinburgh flair and Italian technology.” It’s certainly a lot more interesting than your standard lager (or the sound of technology-beer, which sounds boring, dubious and concerning) with distinct and satisfying maltiness and a fluffy head that stuck around for ages despite the plastic pint pots. I’d been after trying to find some since I’m a genuine lager/pils fan and when a man threw a flyer at us about the place, we ran for it, ducking men and women on stilts and dodging escape artists like our lives depended on it.
Under the arches was a relaxing place to sit and chat and I hope despite its pop-up nature it becomes a more permanent fixture. It was fun to sit out on wooden pallets in a beautiful city surrounded by countless monuments, follies and architectural wonders and pretend I was in a cool but derelict part of Manchester. It somehow made me feel even more at home. I was extremely happy to see artisanal coffee vans on site too – it meant I could stay longer while everybody else nerded out over grind settings.
After this, we wandered the streets collecting comedy show flyers, ate at Wings (with chasers of Red Stripe) and got extremely drunk in Kilderkin down at the bottom end of the Royal Mile, a pub with a rum list that could floor a concrete pirate. I’m afraid this is where our first day’s drinking diary comes to an end.

2 thoughts on “Another Excellent Edinburgh”