I’m early for everything. When I’m with my other half it doesn’t matter so much because he’s chronically tardy, but when I’m organising a trip by myself I’m meticulous about my ETA, like a retired Sergeant Major who can’t shake the military out of their mannerisms. So, marching up Shudehill from Victoria Station, here I was arriving for an event a full 20 minutes early. The first one to arrive – always. My hosts for the evening were much more attentive than I hoped as I skulked in the shadows and they spotted me immediately, and welcomed me into the basement room of The Patron on Thomas Street where marketing materials had been laid out to announce the launch of Manchester Union Lager. I’m then led to the bar.

The shared dream of marketing professional Jamie Scahill, brewer Ian Johnson (formerly of Six O’Clock Beer) and director of Cave Direct Will Evans, Manchester Union Lager is something of an oddity. Manchester’s railway arches and disused units are already crammed with independent breweries pumping out beers that taste amazing, win awards, and cause tourists to leave the sanctity of London and travel north. To stand out here, to be different, you need to do something nobody else is doing. Behind the bar, Will Evans pours me a heavy tankard of amber-gold lager and hands it to me with a genuine beamer of a smile. “You’re the first to taste this – outside of us lot,” he says, gesturing around the room at the people who helped make this beer happen. Sometimes being early has perks. 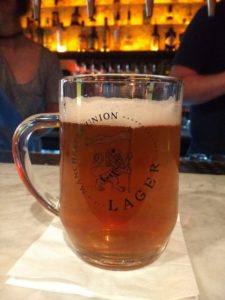 It’s darker than I expected – almost the colour of Vienna lager. A little hazy too – a fact that’s pointedly remarked on by both Will and Manchester Union Lager’s brewer Ian Johnson. According to Will, they’re filtering that out in a revised version of the beer which will be heading to market later this year.
On the nose (I learned that at the World Beer Awards), it’s light and airy, tinted by what I always describe as a nourishing smell of malt (think Horlicks), with absolutely no diacetyl sweetness or metallic scents drifting through. Will explained that in finding the right recipe for this beer, he wanted to create a blend of Central European attributes, keeping the aspects he enjoyed, ditching the ones he didn’t. For him, Czech butterscotch-sweetness wasn’t desirable, and neither was the metallic scrape of pilsners from northern Germany.
“I wanted to create a beer that was balanced, above everything else. I wanted bitterness and maltiness – but not too much. I wanted the body and mouthfeel of Bohemian beers, but I wanted to add more depth, and a bit more swagger.” – Will Evans, Manchester Union Lager
Tasting it, a big hit of malty mouthfeel demanded another sip, where my tastebuds then caught up with the bitterness Will was talking about. I cornered brewer Ian for some answers. He told me currently the beer is sitting at around 35 IBUs (smack bang in the middle of a German pilsner, right at the lower end of Bohemian) but they’re considering taking it to 32 depending on feedback from drinkers. Personally, I hope they don’t. The level of bitterness it’s currently at plays off squarely with the light hoppiness they’ve chosen to run with – saaz for aroma, and Polish marynka for bittering – and with the hefty oomph of body I’m assured comes from decoction and decoction only. For me, the lack of sweetness which I was expecting from the colour came as a bit of surprise. An explanation of the flavours within helped me to understand what the beer was; essentially, their unique take on what a lager can be, but I wonder how many drinkers will care to dig deep enough to figure that out. In my opinion, they’ll probably be too busy polishing off their pints. For a beer with such body it’s refreshingly swiggable. To a lager drinker used to lighter, commercial styles, I feel like it’s balanced enough to appeal, drawing you in with easy-drinkability before delivering a flavoursome smack in the mouth.
Jamie topped my glass up and I asked about the brewery. It’s been three years in the making, and to use the hackneyed phrase “labour of love” here wouldn’t just be lazy, it’d be true. Ian, Will and Jamie have spent those three years going over the details – water chemistry, recipe development, market research, location scouting, kit design and build – until they were happy to release their beer to the world. Well, Manchester. 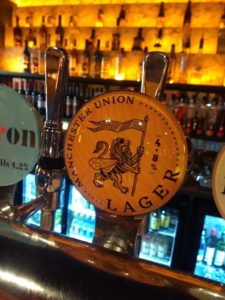 Sourcing and installing the kit itself was one of the most difficult parts of the process, Will informs us via powerpoint presentation. Dead set on brewing via single decoction, they looked to manufacturers from Hungary to China to try and find a suitable kit… before finding exactly what they needed in Vince at Johnson Brewing Design in Bury. Designed and built locally, the whole steam brewery is now ready for its final stages of completion.
“Basically, we wanted to create a lager in Manchester for the people of Manchester to be proud of. Our mission statement is that we’re not just another brewery. We’re Manchester’s only lager brewery – and that’s all we’ll ever brew. We brew lager with a Mancunian swagger.” – Will Evans, Manchester Union Lager
Choosing to only brew lager is oddly rare in the UK. Despite lager making up 65% of all beer sales in the UK, drinkers are more likely than ever to choose a premium brand at the bar. Manchester’s pubs are proud to offer the incredible selection of Mancunian beers to customers, but local lagers are nearly always brewed as one-offs, or special editions. What Manchester Union Lager hopes to achieve is unique – to brew one successful beer that will always be popular, and make it available only within the local area. Oh, and they’re not doing cans. Ian told me in no uncertain terms that they’re staying in kegs, served in their branded glassware (the style of which by happy coincidence is called a “Howard Mancunian.”) “We’ll maybe try bottles,” he said, “but I’m not sure, and I do know that cans won’t work for us. The glassware is part of the experience.”
Also a part of the experience is the marketing, which enables Jamie and Will to discuss the brewery’s story at length. There’s a tie here to lager being the people’s drink, and reclaiming it as a product that’s good and valued and appreciated instead of patronised. If you’re wondering about the Trade Union influence, they found out that lager was created at the same point in history as TUs were founded in the UK so they decided to have a bit of fun with that. 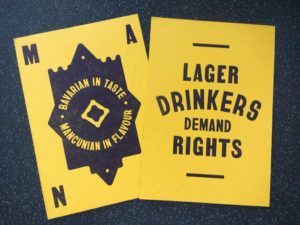 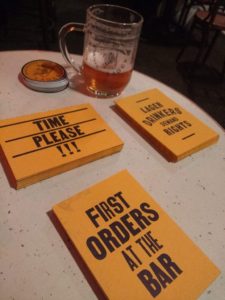 As well as supplying to pubs in the local area, the brewery are putting plans in motion to get their tap room up and running for Autumn 2018. I asked them if they’d just be selling lager there, or if they’d be offering festival brews too – perhaps a Marzen or an Oktoberfest? Ian told me that they’d been experimenting with recipes and would love to do this. He then explained how they’d created a Stein beer using rocks heated to around 1000 degrees Celsius. “It was delicious,” he said, “But incredibly dangerous. I wouldn’t try it at home.” Sensing my disappointment he added, “If you do, make sure you use granite. Everything else explodes.”
So, soon you’ll be able to proudly drink a pint of fizzy lager in Manchester (and the surrounding areas, if you ask nicely) that’s made in Manchester by Mancunians. And I hope you do. I really enjoyed it.