Burnley-based Moorhouse’s Brewery has undergone some grand changes in recent months. Back in April 2017, they appointed new Managing Director Lee Williams, a distinct strike out into fresh new waters. Williams had previous success bringing rival brewery Thwaites into craft beer contention with popular hop-forward 13 Guns and the big success of Wainwright, which I have to confess I choose over most beers when I see it in a Thwaites pub. (I’m a sucker for the Lakes.) His appointment was given a fanfare many were unsure of – he had come to build a “modern, contemporary” brewery, filling the shoes of David Grant, a traditional MD whose career with Moorhouses spanned 14 years. Do you remember what Moorhouse’s was like 14 years ago? Their Premier Bitter won a gold medal at The International Beer and Cider Awards. The brewery hadn’t yet opened a visitors’ centre. It was exactly 100 years since the owner of the brewery was killed by an exploding bottle. That last one isn’t so relevant to my point, but it’s a pretty gruesome and interesting fact.

Last summer, the brewery lost jobs as part of a restructure, which sounded to many like the start of  a radical change. Then, two more awards came, for very trad, very Real Ale White Witch and Blond Witch, and folk settled down a bit. Cue Mr Williams’ grand plans. I think we’re going to have some fun with Mr Williams. 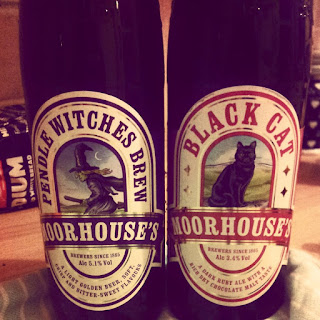 Why do I say that? Local beer blogger and columnist Mark Briggs aka. Real Ale Up North posted an article yesterday (Thursday 22 February, 2018) in the Lancashire Telegraph (among other local papers) revealing Moorhouse’s plans to “embrace the craft beer era” – their words, not mine.

Previously content with their offering of CAMRA-pleasing trad ales and a couple of fancy extras – Stray Dog, for example, made in collaboration with New Order – they’re now moving into the brave new world. In his piece, Mark describes a “tiny” 100 litre brew kit, used twice a week to craft 400 litres of experimental beers. He continues:

The beer that was currently being brewed, was a ‘high octane’ Russian Imperial Stout at 7.9%. Assistant Brewer, Jordan Hamer, trusted me with adding the Willamette hops into the boil.

Lee [Managing Director of Moorhouses] said: “We will be doing this Imperial Stout for the World Cup in Russia – it seemed appropriate. The Vanilla Stout we brewed recently had good feedback from both the Pendle and Manchester beer festivals.”

Head brewer Dan Casaru added: “[the new kit] gives us the option to play around with our different styles… it gives us the opportunity to brew more bold and creative beers.”

Bold and creative beers from Moorhouse’s. Those words are music to my ears. This time last year, you could often catch me raising my hands up to the rainy East Lancashire heavens, willing my tiny world existing just outside of the fringes of the craft beer bubble to accept craft beer as a good thing. We have a few breweries really excelling in this area, including Northern Whisper who are working on some pretty exciting things at the moment, but our big hitters seemed staunchly resistant to change. It’s understandable – as pointed out in my post a couple of weeks ago, there’s not the appetite for craft beer here like there is elsewhere in the country. However, in my opinion, that’s never a good enough excuse not to innovate. People didn’t realise they needed Reggaeton and now look at us. I’m now truly excited to find out a) what Moorhouse’s start creating and b) how this changes our beer in E. Lancs.
This article couldn’t have come at a better time for me. I read an article in our local Campaign for Real Ale magazine over the weekend that suggested the two types of beer were brown (good) or grapefruit (bad). I’m still pretty raging about it. The more opinions like this (no matter how tongue in cheek) are challenged by our local well-respected brewers, the better. People’s loyalties lie with the likes of Thwaites and Moorhouse’s, no matter how large* they become. I’m hoping they use this powerful influence to gently win the hearts and minds of their customers. I’m hoping this is the start of an exciting new chapter in Lancashire brewing. I’m hoping that the era of identical blonde and pale session ales is over. I’m hoping, and I don’t think that’s an unreasonable or naive thing to do.

4 thoughts on “Moorhouse’s and “embracing the craft beer revolution””