If there’s one thing I love, it’s music that tells a story. As a kid, I always loved songs that put me in a totally different place and made me think about things – things like lust and nightclubs and fit girls and something hiding in the woodshed – I’d never heard of before.

This love has endured and now I’m in my 31st year of life, I still love a song that takes me somewhere I didn’t intend to go. There’s something totally transportive in hearing an embellished anecdote disguised by the artist as a tune. It’s like peeking round the kitchen door in their house and hearing them chat to their mate about it on the phone. I always feel like I’m there in their imagination with them, seeing what they saw, indulging in the little exaggerations they’ve added to make it a more interesting tale. All the best storytellers do it. I first noticed it as a 7 year old when I heard Disco 2000 for the first time and assumed it was about people at my school meeting in Lancaster “by the fountain down the roaaaa-hoad.” Jarvis Cocker became a beanpole Shakespeare to me, before I understood what Shakespeare really was, telling me about the squirming, bawdy underbelly of life and how it could be revelled in, showing me the human experience before I’d even turned 8. 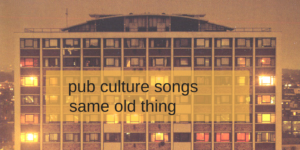 I had another such revelation when I was 16 and over my metal-only phase and Mike Skinner entered my life. A man intent on telling the stories of his resolutely average life in full, flashing neon, I ate Original Pirate Material like a meal every day for a year. It was so refreshing to me, to hear the everyday in such blunt and brilliant terms, patched right from one brain to mine.

In particular, I loved The Streets’ central themes of dossing about in the pub. Every day was the same, but different, and most of them ended draining pints or cans, depending on how skint he was. When I left home at 17, I could suddenly relate hard.

Who’s round is it?
Down that beer quick, smash my glass back down
Fall over the table, all rowdy and pissed
Seems the only difference between mid-week shit
And weekend is how loud I speak
When Thursday beers down the pub (it’s the quiz!) turn into a cheeky couple on a Tuesday (rude not to, the pool table’s only 30p) become your life, it’s easy to turn your local’s lounge into your own front room, meeting your mates there every day for crisps and shit-talk. You’re not necessarily there for the beer, it’s just somewhere to be, something to do, but you’re appreciative of it all the same. It loosens up the grip of boredom. Makes it feel like you’re making sense of the world.
Pick a bottle off the table, peel the label, tell a fable
Time moves differently in your local, a fact Mike Skinner knows too well. The last pint always ends up penultimate. No matter your intentions, no matter how much time you spend in there, you’re somehow always there too long, running late for some prior engagement, nefarious or otherwise.
Gotta see a man about a dog, can’t be late, I’m always late
Raining cats and fog but nice and dry in the Black Dog
Down it in one, my son
Can’t sit here, gotta run, things need done
You hate the boredom of the place, but it’s an extension of your home too. A shelter from the shitty, grey world outside, somewhere where there’s always somebody to listen to your thoughts, no matter who they are. Leaving’s a wrench, especially on a wet Thursday, even when all you have in there is the sound of the fruities and enough change for another two Carlings. Mike’s adept at talking about male loneliness and depression and I think although this tune is more a tongue-in-cheek look at wasting your life down the Dog, there are aspects of these themes surfacing. As they do in life. That’s why I like him. He’s so good at what he does.
Apparently there’s a whole world out there somewhere
(It’s right there, right there)
I just don’t see it, I just don’t see it
What I love most about “Same Old Thing” is the monotony dredged right up from his tarry lungs. But even inside that loop of stabby strings (used throughout the album – he loves a bit of classical drama does Mike) there’s a glint of comfort. He likes the familiarity of his everyday – moaning about nothing changing in your own shithole town is just a pastime. You might mean it, but you’re not changing it anytime soon. You’re not trapped, you’re just… Anyway, who’s getting the next ones?
If you like The Streets, please read this fantastic interview with Rut Blees Luxembourg, the photographer and artist whose work “Towering Inferno” was used as the album art for Original Pirate Material. Her insights are extremely on point.
If you like me and my writing, please consider buying me a pint via my Ko-fi page. It really puts me in a good mood!