It’s a simple question, unless you’re being asked it point blank on live radio. There should be a simple answer – some small glint laying there in the past that points towards the moment you decide, “this is mine.”

Well, sometimes you don’t want to share that moment. Maybe it’s private. But then maybe you feel self-conscious, because it’s only beer after all, and the person was only asking to be polite. So you make something up. I do that a lot. Then, the made-up version becomes the truth and I tell it easily. So on the radio, I heard myself tell a story that wasn’t true, but I’d said it with such ease that I’d believed myself. And that’s why I’ve decided to take some time to get to the bottom of it. What got me interested in beer? And while we’re at it, when did I first drink it?

The funny thing about beer is that, for me at least, it’s deeply personal. Beer is a social lubricant and for most people, it comes hand in hand with the most social of our situations – the pub. When I talk about my enjoyment of beer, I’m simultaneously discussing my love of pub culture, which in turn encapsulates a love of people, their stories and their own individual lives. To me, you can’t separate the two. That’s why it’s difficult to unearth the truth about what interested me in it. I’m having to dive deeper than my first pint. It’s far more ingrained than that. 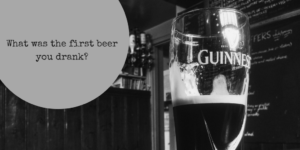 And this is where it gets personal. Was my first positive experience of beer in the warmth of a local bar? Or was it with friends at the park? No, I think it was earlier than that. The metallic smell of cheap lager and the sound of cans being drained and crushed is wrapped around some of my earliest memories like fishing line. Those cans, enjoyed in the sun on some camping field at a bike rally – maybe Kent Custom Bike Show, maybe the Bulldog Bash – were a sign of relaxation. Holiday time. I’m trying to think of any moments when the adults in my life drank in front of me other than this, and besides maybe the odd pint in a pub, I’m struggling to recall. I knew they did, when they headed out to Town, or stayed in with the mysterious Jack Daniels that sat on the high countertop, but I didn’t see them drink it. I just knew it.

Because of this, I think, beer has never left a shadow hanging over my life, and I feel lucky for that. I’ve maintained a cheerfully positive view of alcohol throughout my life. Nevertheless, it’s always been present, as I’m sure it has for many, and there was never any doubt that I’d be a beer drinker.

I feel like I’m not being totally honest. I can’t get nostalgic without talking about something I never talk about, and so far I’ve been extremely evasive. One of the reasons I hate answering the question “when did you first drink a beer?” is because it’s an intimate family portrait of a girl and her father. They’re sat at a small, round table in a pub, and she’s taken a gulp of his Guinness while he’d turned his head. He’s laughing. She’s grimacing.

I don’t speak to my dad. I know where he lives, I know what he looks like and I know his phone number, but we’ve been estranged since I was 14 years old. If he saw me in the street, he wouldn’t recognise me. I know this because he’s walked past me before, without a flicker of recognition. I talk about him in the past-tense, because he’s a man I used to know, a long time ago, when cans of Boddingtons in fields of tents with family friends dressed in ripped denim and fringed leather were the exciting normality of my life. He’s the man who shaped my taste in music and gave me a short temper, a mean streak and an interest in garages full of motorbike parts. If he ever comes up in conversation, I stick to the safety of my past-tenses and hope this pointed grammatical quirk underlines my desire to never mention him again.

The thing is, he does get mentioned again. In everything I do, there’s always a memory of him, or an imagined memory of him, that begins to surface. So now that beer is something I really care about; a topic I enjoy learning; an industry I can see myself trying harder and harder to gain purchase in, naturally his influence, however tenuous, begins to show itself. And for so long I was doing this by myself, totally for myself, and that was fantastically freeing. But now, in my head, he’s back. 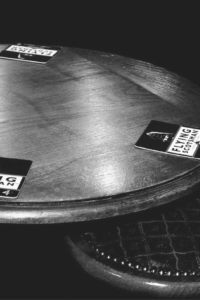 “When did you first drink a beer?”

I first drank a beer with my dad. I used to steal the foam from the top of his pint with my tiny fingers, hoping that this time it would have developed a delicious, vanilla-cream flavour to match the texture my eyes had already tasted. This is one of the only good memories I have of him, and I’m choosing to share it, because beer is something I love and I’m not letting sad old thoughts attach themselves to it.

The first beer I ever drank was a Guinness, during a stolen moment between a man and his daughter. Over the thousands of times I’ve recalled that scene, it’s been worn to a polish. Now what I have instead of a first drink is a loaded image of a table in a pub. We probably all have one. That’s one of the things about beer though, isn’t it? That it’s so very, very personal.

I was inspired to write this because of Drinks Maven’s amazing recent piece for Original Gravity. If you enjoyed reading this piece, please consider buying me a pint over on ko-fi. It really is appreciated!

2 thoughts on “What was the first beer you drank?”