Back in March, I wrote about brewing with Moorhouses, and how I’d tasted the wort of our soon-to-be brown ale and called it a “Victorian Protein Shake”. It made sense to me – it tasted filling and sweet, and full of old-fashioned nutrition. Like a strongman would down a pint of it every morning with a dozen eggs before heading off to lift anvils over his head. Then, Steve from Beer Nouveau decided that this was actually an excellent name for a beer.

I headed down to Beer Nouveau’s Temperance Street brewery in Manchester back in March to bring this idea to life. The brewery’s focus on heritage ales and recipes from the past suited the project perfectly, because making a Victorian Protein Shake requires a real Victorian recipe, and all-Victorian ingredients. Both of which were plentiful here. Steve’s enthusiasm for ye olde ales(e) meant that for weeks prior to my visit he’d been busy finding recipes to work with.

When I arrived, he poured me a glass of Bygge Bere, a gruit made with six-row bere grain (a heritage grain grown exactly the same way it would have grown 1200 years ago) and meadowsweet to a Viking recipe dug out by Archaeologists on Orkney. It was totally unlike anything I’d ever tasted before and it took a few sips to understand what I was drinking. One I got the hang of it – much easier than you’d expect – it went down easily, hiding its AVB well with a little sweetness. I felt like a historian. It set the tone for the day well.

So, I looked over the notes Steve had made about recipes he’d been researching and we decided on a splicing of two recipes – one for a traditional Victorian IPA, and one for a New England IPA that added wheat and flaked oats to the mash and plenty of American dry hop to finish. Also, because we needed to replicate the hop degradation rate of  authentic Victorian IPAs without casking it for 18 months, we looked at other ways to create this effect – drying it out with brett and amending the recipe to suit a much shorter storage time of a couple of months.

Brewing at Beer Nouveau also means being lucky enough to utilise some of the brewery’s specialist Chevallier Nouveau grain – a grain that’s actually unique to Beer Nouveau. For any nerds reading this who are interested in this sort of thing, it’s a blend of Chevallier malt and a malt that’s been kilned at the right 1846 pattern especially for Beer Nouveau. Hence the name “Nouveau”.

This splicing would jump from the origins of the style to the modern day in one fell swoop, with no messing about in the middle bits. We were excited about this. It might go horribly wrong.

As you can see, this beer was hoppy af. We step mashed it, and then for a rest, tried some of Origami Brewing’s Fortune Teller, as Pam who had brewed it popped in. As a cuckoo brewery, Origami sometimes operate from the Beer Nouveau arch (which also explains the hundreds of origami cranes in rainbow colours hanging from the tap room ceiling.) It was a bright, crisp pale, with plenty of hop to kick start my wearing mashing arms again after a quick break.

Having a lovely Fortune Teller with Pam, the person from @Origamibrewing who made it! ? pic.twitter.com/liZ4BXcPmA

Unfortunately for me, here’s where my involvement ends – I had to dash off across town to catch a rail replacement bus (thanks a lot Northern Rail) and left Steve to finish the job. Sorry Steve.

Over the weeks, exciting developments were Tweeted to me. By all accounts, Victorian Protein Shake was developing well, and gaining some slightly unexpected flavours. After crash cooling a month after we brewed it, Steve kegged it and left it to age for a month, upon which it developed a mad bitterness and wood-age taste “like licking a plank”. We decided to keep it ageing until the Manchester Beer Week Temperance Street Party, on the last Saturday of Manchester Beer Week.

Making the leap straight from a Victorian era IPA to a NEIPA with no middle ground.

As it turned out, this was an excellent idea because England were playing in the quarter finals of the World Cup, everyone was in a great mood, the tap room was packed, the Temperance Street Party was a total blast and I was able to force as many people as possible to drink it.

Let me tell you first that I was extremely impressed with us both. Although all I really did was stir the mash and give some ideas at recipe development stage, I was chuffed to bits with what I was calling “my beer”.

It was darker in colour than an IPA (so you could mark it down for that if you wanted) but the taste was really well-rounded and full of grassy, juicy notes. Add to that an underpinning bretty dryness and we basically nailed exactly the type of beer I’m enjoying at the moment. We were both very happy with the result.

We were also very happy with the football result too. 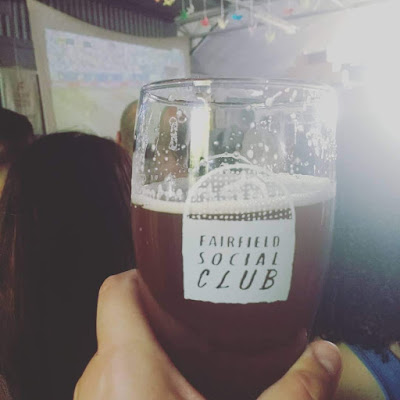