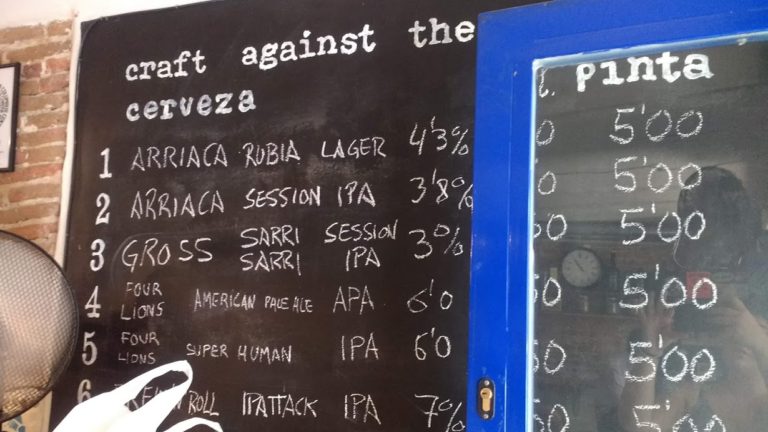 There are a lot of things I love about Spain, and everyone is bored of hearing me go on about it, but one of the things I loved most when I was in Madrid getting to know a little bit about the beer scene was the way everyone I met used the term “cerveza artesanal”.

When I spoke to Paco, the owner of Four Lions Brewery, he spoke about nothing but cerveza artesanal. When I spoke to bar owners in Madrid about how they chose the beers on their shelves — which were a mixture of Belgian beers, European lagers, craft beers and bottles of ale — they always said they looked for artisanal products. And for the purposes of this article, by the way, I’m using the term “craft beer” the way I had to when I was over there. Basically to describe any beer that wasn’t cask. Which got confusing when we started talking about cask’s growing popularity as a trendy beverage in Spain. In fact, here’s a list of all the things we used “craft” as an easy by-word for when language barriers got too much for us:

What I really liked about the term “cerveza artesanal” is that it matches up so perfectly with what’s important about Spanish food and drink. In Spain, making an artisanal product isn’t a way to feel superior. It’s not a form of snobbery, and drinkers there don’t feel it’s a way to dupe people into paying more for a similar product. I was told repeatedly that in Spain, what matters is locality, and good ingredients, and passion, and that for the longest time beer was just seen as something wet and widely available. For the most part it wasn’t even local — Amstel seemed to be everywhere. (Important to note that global “craft beer” brands are held in high esteem too, there’s no getting away from that.)

Where cerveza artesanal is doing well, such as in Barcelona, Madrid, Malaga, San Sebastian and Bilbao, it certainly helps that there are tourists demanding it. But where locals drink, even within those cities, there’s a better sense of locality. From my understanding of the whole confusing what’s-craft-what-isn’t-craft mess, is that to some Spanish people, turning people off from Spanish wine and onto American  beer isn’t a palatable plan. So they’d rather make it themselves, their own way, or at least get hold of beers that offered something different than the apa (American-style IPA, usually west coast).

In a bar called Craft Against The Machine, older patrons are convinced to try beer instead of wine because that beer is a rich, flavoursome Belgian style brewed by a local artisan. (Yes, brewers are artisans here. I like that.) CATM is run by Javier Fernandez, a man at the heart of Madrid’s cerveza artisanale scene. He set up the city’s first bottle shop and enthusiastically sells homebrew equipment to those who come to him regularly. (Sidenote: I’m sorry if you’ve heard this one before, I did write a bit about him last year.) Javier taught me a lot about attitudes towards craft beer in Madrid, namely that people love and value it for many of the reasons it’s often derided as pretentious or exclusionary in the UK and Ireland. While his new customers might timidly hang outside the door unsure of what it is they want, they usually warm pretty quickly to the idea that they’re trying a freshly brewed, locally made (or quality imported) product. It helps there are plenty of people willing to explain what it is they’re drinking too. Javier was keen to point out that in Madrid, waiters are professionals who know their job inside out. People ask questions about the style or the price or even the hops and grains used, and get satisfying answers mostly everywhere they go.

That’s why I really liked an infographic that cropped up on #spanishbeertwitter, made by microbrewery Cervezas Arriaca based in the small town of Yunquera de Henares near Guadalajara, Spain (about an hour’s drive north-east of Madrid). It bravely attempts to describe what they call “cervesa artesana” and in a way, has a really good crack at Defining Craft in the process. Here it is:

Basically the tweet says “the beer you choose says a lot about you. If you drink  “cervesa artesana”, you’re getting all of this too:”

No added gas? Yikes! That’s not craft beer as we know it!

A note on the “no added carb” bit: Visiting Four Lions Brewery was eye-opening in this way because it showed how they carbonated their beer — essentially using the tank method (I know this as the “prosecco” method but Tom reliably informs me it’s called “spunding”) or natural carbonation. So the “sin gas” part doesn’t shock me too much, even though it might seem at odds to how we understand craft beer in other parts of the world. Paco was very keen to brew “natural” beer (something Spanish drinkers do value), and saw well-brewed, high-quality cask beer as the high standard all breweries should strive to attain — even if they were making more effervescent modern styles.

One thing worth pointing out with a big light-up stick is the focus on job creation, local beer’s impact on the local economy and the “fight against market monopolisation”. Spanish artisan beer isn’t just about taste and trend. It’s political too. Big brands are seen by brewers like Paco not only as competitors but as the multinational corporations they are, accusing them of reducing jobs within the industry, using ingredients and hardware shipped in from outside Spain to undercut local businesses and actively reducing choice as a result of flooding the marketplace with implausibly cheap, widely accessible beer. For this reason, many cerveza artisnanale brewers wouldn’t dream of approaching supermarkets to sell their beers either — why stand shoulder to shoulder with the brands they want to distance themselves with, and be priced down for the privilege? A taverna owner told me he didn’t buy local beer because a keg of non-Spanish macro lager cost him the equivalent of £35. Perhaps craft beer started out as a reaction against big business’ methods for the rest of the world, but for many it no longer has such radical intentions. Maybe it’s because craft beer is still relatively new in Spain that the ethics of “craft” are still burning so hot — and why they’re not yet sick of trying to define what it is exactly that makes cerveza artisanale, cerveza artisanale.